This is a face only a mother could love! All who know me, know I can’t resist baby faces and love to kiss and cuddle and look after them, whatever species! But this … was a surprise! He got a big cuddle and hug, but no kiss> He was a very little warthog, but I don’t know how old. 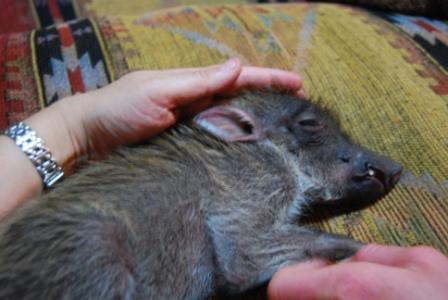 Hunters shot Mom
in breeding season
without care
as to whether she was feeding babies or not.
Poor baby was so stressed, dehydrated and starving
he died within days

As a member of the pig family, it has a naked skin with sparse, long bristles. A characteristic feature of Warthogs are the long curved tusks, which boars grow into fearsome weapons. These tusks are used to dig up roots, which all Warthog love. Males stand 680mm high and weigh 80 Kg. Sows are smaller at a height of 600mm and an average mass of 57 Kg. Wartlike tubercles on the large, flat head is another distinctive feature of this animal. A tuft of hair at the end of the thin tail is very visible when the tail is held erect during running.

RANGE: Occurs in Central Africa and to the south, from the West Coast to the East Coast

Warthogs are day animals and spend most of their time looking for food.

The young may be taken by Eagles and Jackal with Lion, Hyena, Cheetah, Leopard and Crocodile being the main enemies of the adults.

1. Warthogs travel in groups called sounders consisting of 1 or 2 sows and young offspring. Bachelor males usually travel in small groups and old, grumpy hogs stay on their own.

2. Boars have more prominent warts than sows. They are primarily used to protect the face during fights.

3. Warthogs use burrows for shelter and when entering, the hogs back in bottom first. This enables them to defend themselves. In the mornings, warthogs burst out of their burrows at top speed to get a running start on any predators that may be lurking nearby.

4. Although they look fierce, warthogs would rather run than fight. But they can be fierce fighters if forced. Warthogs allow birds, such as the yellow hornbills, to eat parasites that live on their bodies. This symbiotic relationship allows the birds to have a constant food source and the hogs to rid themselves of pests. The Warthog are rooting animals and beneficial to the land by churning up the soil and allowing it to be aerated, which aids plant growth.

5. Warthogs have the peculiar habit of kneeling on the front knees while feeding and foraging in a localized area, and their tails stuck straight up in the air like aerials. Great fun to watch.

This week’s topic for our A-Z ARCHIVE = Tuesday’s photo challenge:
the letter “W”:
introduce one photo of your own archive with a “W” keyword

This site uses Akismet to reduce spam. Learn how your comment data is processed.

Keep Calm and Crochet On U.K

For the love of all things crochet...

Colours Weaved by Silk and Quilling